for something COMPLETELY DIFFERENT!! 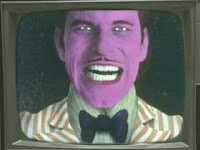 Pres. Uchtdorf spoke out on Same Sex Attraction this week (see Tribune article below). After all the rancor surrounding Elder Packer's talk, this is a welcome change, and is much more in line with previous messages and statements from the Brethren. I think the Church is making a good effort do do damage control and get the official word out. I would like to see more statements from the top, especially Pres. Monson.

Mormons may not know until the hereafter what causes same-sex attraction, but “God loves all his children” and expects everyone to do the same, an LDS Church leader said Sunday.

While the message — delivered to more than 200,000 Utah Mormons — may not seem significant, the messenger was.

As second counselor in the governing First Presidency, Dieter F. Uchtdorf is one of the highest-ranking leaders in the hierarchy of the nearly 14 million member Church of Jesus Christ of Latter-day Saints to address the thorny topic of whether same-sex attraction is inborn.

The gentle tone and emphasis of Uchtdorf’s remarks — spoken at the Conference Center in downtown Salt Lake City and beamed to dozens of church buildings — came in the wake of an earlier speech by Boyd K. Packer, senior member of the LDS Quorum of the Twelve Apostles.

In Packer’s original General Conference speech earlier this month, he said, “Some suppose that they were pre-set and cannot overcome what they feel are inborn tendencies toward the impure and unnatural. Not so.”

Packer later changed “tendencies” to “temptations” on the church’s website.

Still, Packer’s speech generated national controversy and protests from those inside and outside the Salt Lake City-based faith, many of whom saw the apostle’s statements as contributing to the self-loathing and suicides of gays.

In response to the outcry, LDS spokesman Michael Otterson issued a strongly worded condemnation of bullying and belittling of gays, saying, “Their struggle is our struggle.”

“Many questions in life, however, including some related to same-gender attractions, must await a future answer, even in the next life,” Uchtdorf said. “Until then, the truth is, God loves all his children, and because he loves us, we can trust him and keep his commandments.”

“It seemed fairly close to the line we’ve been getting lately — the idea that the practice is sinful, but homosexual tendencies are acceptable within the church as long as people don’t act on them,” said Jennie Pulsipher, a Mormon who watched the regional conference via satellite at her east-side Salt Lake City stake center. “He also emphasized that [gays] should be treated lovingly as children of God.”


“We’re going to be hearing more and more statements like this, calling church members to a greater expression of compassion and kindness,” said Mansfield, who writes at northstarlds.org, a website for believing Mormon gays. “Doctrine will remain the same, but we’ll see a pretty radical shift in the culture of the church in how we relate both to the issue of same-sex attraction and to those who experience homosexual feelings. We’ve made some significant strides over the last few years, and I think this is only the beginning.”

Though he wasn’t in the audience, Brigham Young University microbiologist Bill Bradshaw was pleased to hear of Uchtdorf’s remarks.

“I totally agree that no matter what the cause or what we eventually find out is the definitive explanation, it doesn’t alter our opportunities nor obligations to treat our gay brothers and sisters like everyone else — with Christian kindness,” said Bradshaw, who, with his wife, Marge, directs Family Fellowship, a support group for LDS parents of gays and lesbians.

That compassionate approach, he said, “resonates with me.”

Yet Bradshaw, who has a gay son, believes a wait-and-see approach to causality belies a mountain of scientific research.

“I have spent a long time investigating the published evidence from empirical studies, and I know that the overwhelming evidence strongly favors the position that sexual orientation is programmed by biological mechanisms,” he said. “The evidence that it’s a choice or that it’s programmed by social or psychological forces is lacking.”

On Monday, Bradshaw lectured about the topic in a BYU bioethics class, explaining all the research he has uncovered in recent years.

The question of cause inevitably leads to the next question — the issue of change, he said. “The evidence shows overwhelmingly that orientation is not amenable to change.”

During Sunday’s wide-ranging address, Uchtdorf did not mention the issue of same-sex attractions changing or anything else related to the issue.
But the German leader did allude obliquely to the question of immigration by calling himself a “legal alien.”

He thanked Utahns for welcoming him and his family to the Salt Lake Valley in 1999 when he was called for an “overseas assignment,” but he expected to return to his home in Europe one day. Then, in 2004, he became an apostle, a lifetime position. He and his wife, Harriet, realized, he said, that “the ‘Wild West’ was now our final destination.”

“You are and have been for generations wonderful examples,” he said, “of integrating foreign people into your neighborhoods and communities.”
Utah’s dominant religion hasn’t taken a definitive position on the immigration debate. Instead, LDS leaders have called for “compassion” and encouraged “careful reflection and civil discourse” when discussing the issue.