WASHINGTON (AP) — President Barack Obama on Friday formally signed off on ending the ban on gays serving openly in the U.S. military, doing away with a policy that has been controversial from the day it was enacted and making good on his 2008 election campaign promise to the gay community.

That means that 60 days from now the ban will be lifted. 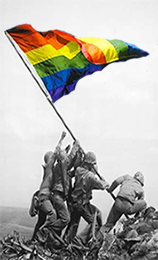 "As commander in chief, I have always been confident that our dedicated men and women in uniform would transition to a new policy in an orderly manner that preserves unit cohesion, recruitment, retention and military effectiveness," Obama said in a statement.

"Today's action follows extensive training of our military personnel and certification by Secretary Panetta and Admiral Mullen that our military is ready for repeal. As of September 20th, service members will no longer be forced to hide who they are in order to serve our country."

Somehow all the terrible things forecast by the right has not happened. The military is still working properly and unit cohesion is the same. What will damage the military is the budget mess before Congress. We can't really rescue people without jetfuel for the helicopters.