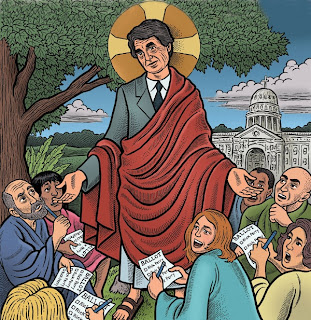 ﻿﻿ No, I'm not referring to the movie by the same title. I'm referring to our Republican presidential candidates. Little known to mainstream America, and largely unreported by the press; the Republican party has been undergoing an "infiltration" by two radical right-wing Christian groups, loosely called "Dominionists" and "New Apostolic Reformationists".  Their goal? To literally take over everything. Michelle Bachmann and Rick Perry are among their vanguard.

Derives from a small fringe sect called Christian Reconstructionism, founded by a Calvinist theologian named R. J. Rushdoony in the 1960s and based on the verse in Genesis 1:26


And God said, Let us make man in our image, after our likeness: and let them have dominion over the fish of the sea, and over the fowl of the air, and over the cattle, and over all the earth, and over every creeping thing that creepeth upon the earth.

Dominionists take that literally. In fact, they take every word of the Bible as the literal truth. They believe man has dominion over everything on earth, including all its natural resources. No wonder, then, that Michelle Bachman declared early on in her candidacy that one of the first things she would do as President is eliminate the "job killing" Environmental Protection Agency. Can't have anything standing in the way of unbridled dominion!! And that right to dominion extends WAY beyond earthly resources. They believe it is their calling to "infiltrate" and eventually control every institution of man. The ultimate goal? A totally Christian society with laws based on literal Bible interpretations. Bring back the death penalty for homosexuality and adultry. They even want to re-interpret the practice of slavery in America, seeing it as a benign institution where benevolent whites actually did black slaves a favor by giving them a leg up in the new world, since they weren't socially sophisticated enough to make their way in a modern society.

Michelle Bachman and her husband are deeply entrenched in this movement. Check out this article in The New Yorker by Ryan Lizza Leap of Faith . This one is long, but informative and deeply disturbing. What these people believe is almost unfathomable.

With roots also in the Christian Reconstructionism movement, this group believes they have been called by God to lead Christians back to the old ways of the Bible and, like the Dominionists, to a totally Christian version of America. The parallels to Mormonism are striking, including the belief that the Founding Fathers were inspired, and in modern day "Apostles" and "Prophets". In fact, if you read this amazing article from The Texas Observer by Forrest Wilder called Rick Perry's Army of God, you'll learn that Perry was actually "ordained" by two of these Apostles to become the next President of the United States! So when Perry says he felt "called by God" to run for President, he means that literally. The beliefs in Perry's camp are just as disturbing and menacing as Bachmann's, and the two movements have connections with each other on certain levels hard to understand. The alarming thing is that this movement currently controls a large portion of the Home Schooling programs in America. They are making serious inroads into our institutions and thinking.

Another article that fills in a few gaps of the first two is this one by Michelle Goldberg called A Christian Plot for Domination? 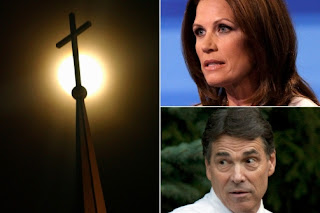 Not convinced there's a problem? Check out this video Reclaim the 7 Mountains of Culture

Bottom line - if people were worried about Mitt Romney being a "puppet" for Mormon leadership, they had better take a close look at the malignant alternatives Perry and Bachmann represent. Many of the baisc freedoms and rights we now enjoy could be in jeaopardy if these right-wing radicals come to power. Gay people especially should be on alert. This will not be an election to sit on the sidelines if you care about Democracy as we know it.

title illustration by Mario Zucca, used with permission from The Texas Observer
Posted by Neal at 1:42 PM