...of Wisdom and Wizards 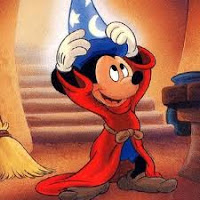 Three of my favorite books/movies (including series) of all time have involved Wizards. Starting with the Wizard of Oz as a young child, and ending this summer with the final installment of the Harry Potter series.

The Wizard of Oz was already a classic book when I was born, and I can remember my grandmother had a leather-bound copy of it in her book case. Pity I don't have that now, as it was probably an early edition. It became a tradition for the movie version of Oz to be broadcast on TV every year around Halloween, and I can distinctly remember as a 6 year old child being both terrified and enchanted by the witches and wizards in that movie. It still ranks as probably my all-time favorite. Other notable wizards include Gandalf from Lord of the Rings, and Dumbledore from Harry Potter.  Oh yes, and who could forget another Wizard - Mickey Mouse in the classic Sorcerers Apprentice ?! That one had no words, just a lot of fun!

So here is my heart-felt tribute to the Wizards in my life and the wisdom they have meted out over the decades. Timeless wisdom, for the most part. Some are quotes from the movie versions, some from the books. Enjoy! 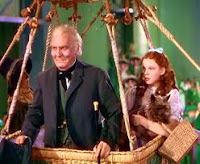 "You, my friend, are a victim of disorganized thinking. You are under the unfortunate impression that just because you run away you have no courage; you're confusing courage with wisdom."

"You people should consider yourselves lucky that I'm granting you an audience tomorrow instead of 20 years from now."

"Back where I come from there are men who do nothing all day but good deeds. They are called phila... er, phila... er, yes, er, Good Deed Doers" love this one! 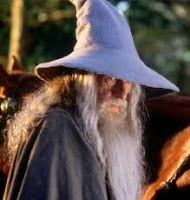 "Yet it is not our part to master all the tides of the world, but to do what is in us for the succour of those years wherein we are set, uprooting the evil in the fields that we know, so that those who live after may have clean earth to till. What weather they shall have is not ours to rule."

"Many that live deserve death. And some die that deserve life. Can you give it to them? Then be not too eager to deal out death in the name of justice, fearing for your own safety. Even the wise cannot see all ends."

"...that is not for us to decide. All we have to decide is what to do with the time that is given us.”

"It's a dangerous business, Frodo, going out of your door," he used to say. "You step into the Road, and if you don't keep your feet, there is no telling where you might be swept off to."

"Despair is only for those who see the end beyond all doubt. We do not."

“It is not our abilities that show what we truly are. It is our choices.” my all-time favorite!

“We must all face the choice between what is right and what is easy.”


“It does not do to dwell on dreams, Harry, and forget to live.”

“Fear of a name increases fear of a thing itself.”

“Humans have a knack for choosing precisely the things that are worst for them.”

“Youth cannot know how age thinks and feels. But old men are guilty if they forget what it was to be young…”

“…. we are only as strong as we are united, as weak as we are divided... Differences of habit and language are nothing at all if our aims are identical and our hearts are open.”

“Time is making fools of us again.”

“To the well organized mind, death is but the next great adventure. It is the unknown we fear when we look upon death and darkness, nothing more.”

“It is important to fight, and fight again, and keep fighting, for only then can evil be kept at bay, though never quite eradicated.”

“The truth. It is a beautiful and terrible thing, and should therefore be treated with great caution. “

“It is a curious thing, Harry, but perhaps those who are best suited to power are those who have never sought it. Those who, like you, have leadership thrust upon them, and take up the mantle because they must, and find to their own surprise that they wear it well.”

“Indifference and neglect often do much more damage than outright dislike.”

“Happiness can be found even in the darkest of times, when one only remembers to turn on the light.”

"It matters not what someone is born, but what they grow to be."

I like in the last one when Dumbledore responds to harry asking if the scene is in his head or if it is real and Dumbledore says, "Well of course it's all in your head, but why should that make it any less real?"