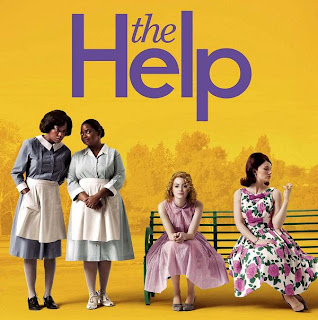 The Help is without a doubt one of the best movies of the year. Superb, really. I would not be surprised at all if it sweeps the Oscars next year. For those who maybe haven't seen it yet, I would highly encourage you to do so. The Help is decidedly a chick-flick, but far more than that. Its a social commentary with a glimpse into a world few Americans could ever imagine. And its a realistic portrayal - I know that for a fact.

Interestingly enough, my family is from a Southern town similar to Jackson, Mississippi - the town portrayed in the movie. There are so many scenes and situations portrayed in it that echo my experience as a child. My "rich" grandmother had four black servants - a cook, a laundry woman, a house keeper and a yard man (when my dad was a baby she temporarily added a fifth servant - a wet nurse to feed him). My grandmother was into the social scene just like the white women in The Help. I can remember the large Bridge Parties she would host in her home, which seemed so mysterious to us kids, since we weren't allowed to play with cards and we were absolutely forbidden to even peek in during those bridge sessions. Like the white children portrayed in the movie, were loved on and doted over by the Help. We loved them (except the yard man was a little scary)! They were so kind, and always made you feel good. And of course, the cook was the center of attention if it was your birthday, because she would make you a spectacular cake and you got to tell her what you wanted on it.

My favorite, however, was the laundry woman. She worked in the basement and had this amazing ironing machine that could iron almost a whole shirt with one dramatic whoosh! of steam. For a little kid, it was kind of magical. I would sit there with her while she used the magic ironing machine, and she would tell me stories about when I was a baby. She helped take care of me, you see. In fact, she helped care for and raise my dad, his brothers and sisters, and most of us grand kids. She probably worked for my grandmother most of her life, and that wasn't uncommon in those days.

All of us kids were really too young to understand that these sweet people were being repressed, discriminated against, and persecuted by their community. We approached them with the innocence only a child possesses. I do remember once having to go with my grandmother at Christmas time to the landry womans house. It was a run-down shanty on the poor side of town. This lady had gotten very sick, and my grandmother wanted to see her. It was kind of a disturbing experience for me, because that was the first time it hit me that this woman was poor. The only heat in the house was a lump of coal burning in the fireplace. I had never even seen coal before. It smelled bad. Her husband told fishing stories while my grandmother visited with her. I remember my grandmother giving her a hug as we were leaving, and pressing $100 into her hand. She tried to refuse, but grandmother insisted. That was the last time I saw the laundry woman.

So, if you see the movie you will see scenes that almost directly correlate to some of my early childhood experiences. I wouldn't say they are unique, but they are unusual artifacts of a dark time in this country's history. We have, thankfully, come far away from those days, but prejudice has not altogether been vanquised from the world. That starts with each one of us vanquishing it first from our own heart.
Posted by Neal at 9:17 PM