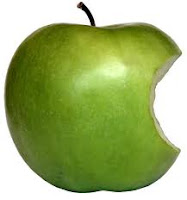 I came both early and late to the Apple party. The first computer I ever touched was an Apple II, which had a character-based green screen (think The Matrix!) and was at the same time cool and yet "clunky". It was cool because there was nothing else like it, but getting the darn thing to do something useful was another matter entirely. We used it to run a chess program.

That was my last exposure to Apple products for some time. Five years later a friend let me play with his new Macintosh. It was a small almond-colored cube with a tiny black and white screen. But the graphical user interface was neat - you could see the start of something revolutionary underneath it all. And it had this weird new thing called a "mouse" attached to it. Took some getting use to.

Another five years later I was immersed in a PC-based world. Businesses did not run on Macs - they ran on IBM. My shift towards a career in computer science was decidedly flavored by the business world I was connected to. There was no room for Apple there. Everything was DOS, servers, Novell, ethernet, and eventually Windows. PCs were "open", flexible, and had lots of options - lots of parts made my different manufaturers. Lots of software made by the likes of Lotus, WordPerfect, and Microsoft. Lots of competition. Lots of headaches! Platforms were unstable, and software crashed a lot. But Apple - well, that was almost a cuss word. We used to joke about Apple computers - they were for kids and people who couldn't understand "real" computers. After all, we could go to the command prompt on our DOS based PC and type in cryptic codes to make our computers do all kinds of fancy things - like copy a file! Or bring up the contents of a directory.  C:\DOS > DIR. This stuff was authentic geekaziod! We weren't about to drive a computer with an automatic - that was for sissies! We wanted a 5-speed manual!


Nearly twenty years later, and my how times have changed! My boss uses a MacBook Air. My brother-in-law hangs tight with an iPad. And I am almost inseparable from my iPhone 4. Inseparable. My seven year-old PC is about on its last leg, and I have begun shopping for its replacement. At the Apple store.....

Thanks, Steve, for thinking different. RIP.
Posted by Neal at 6:47 PM