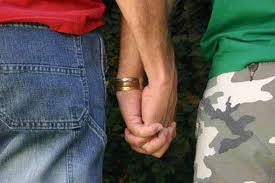 A recent discussion about this term got me thinking - why do people say this? I hate it. When people get married or have a significant other we don't say they're living a 'straight lifestyle'. They are just in a loving relationship. I think this is one of those terms invented to marginalize gay people and pigeon-hole them into a stereotype. To set us apart from the 'norm'. There are indeed things that set us apart, but I don't think lifestyle is one of them. Let's consider for a moment:

Gay Community - this definitely exists, and indeed sets us apart. Thanks to the prejudice, hatred, and persecution from straight people; gay folks were forced to form their own community for survival and mutual support. If you look back in history, Mormons did the same thing when they were the hated, persecuted minority, and in many ways we still do it. The Mormon Community is alive, well and thriving thank you! Jews and other persecuted minorities have done the same at various times and under certain circumstances. This is natural, and is simply part of survival. So the fact that gays have their own 'community' - seems pretty normal.

Gay Lifestyle - this one falls flat for me. A lifestyle is a particular way of living, and for someone to be living a certain lifestyle one has to be following a pretty well-defined set of rules or expectations surrounding that lifestyle. Perhaps there is a military lifestyle - since so much of your life is dictated by someone else and there are all these rules. But I don't see a gay lifestyle. In fact, you could argue that Mormons have more of a "lifestyle" than gay people, since you have to follow such a rigid set of standards to be considered a good one. Gay people are simply living life. There is no set criteria that defines how we live. Some are conservative; others liberal. Some religious; others not so much. Some are in committed relationships; others have no commitments. Some are 'out and proud' others are quiet and in the closet.  Some have kids; others don't. Some are married to the same sex; others are married to the opposite sex. The variety of "lifestyles" gay people live is really endless. You could say the same about straight people too. There isn't one prescribed "lifestyle" they live. The variation is endless. So once again, gay people seem pretty normal.

I think us gay people are simply living life the best we know how under the circumstances in which we find ourselves. This varies from individual to individual and with every situation. But our community and our culture is not a "lifestyle". We're really just normal folk with normal lives and hopes and dreams and everything inbetween. Just like everyone else...
Posted by Neal at 4:28 PM

I have always been bothered by the term myself. I loved your explanation of it! You're amazing!

So true, I hate it when people say gay lifestyle, another kind of code way of saying it is "an alternative lifestyle." you are absolutely right.

That term "gay lifestyle" is so antiquated, I can't remember the last time I heard it. I've always found it offensive. I guess most thinking people would, which explains why few people with gay friends or family would even think to use it any more.

I checked the word "culture" in my on-line dictionary. It includes the following definitions:

"the customs, arts, social institutions, and achievements of a particular nation, people, or other social group"

"the attitudes and behavior characteristic of a particular social group"

Since there is indeed a gay community (i.e., a gay "social group"), I guess by definition we would have a culture.

I guess the question is, if there were no homophobia, would gay people be so integrated into society that we just wouldn't even think of ourselves as a social group? (Like people who have freckles or are left-handed or who like sea food?)

Or does our attraction to members of the same-sex make us different enough that we would still have a separate community even if we were fully accepted?

Good question, John. I don't think we'll know the answer but perhaps a generation or two from now we will no longer be 'strangers and foreigners'