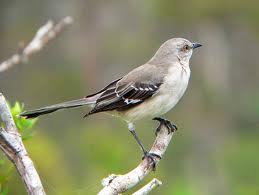 Sometimes in this crazy, technology-pervasive world you get to have an experience that brings you back down to earth. I'm a habitually early riser, and I like to go outside while the day is still cool and the light is soft. The other day I happend out on my usual stroll when I was particularly struck by the activities of a Mockingbird.

Mockingbirds are not the flashiest bird you're likely to see in the woods. In fact, they're fairly plain. They do have some bright white feathers splashed here and there amongst their soft grey plumage, but nothing that would grab the headlines. Its easy to overlook such a bird when compared to, let's say, a Cardinal. Or a Goldfinch. But what the Mockingbird lacks in couture, it most certaily makes up for in other ways.

Despite the unflattering name, Mockingbirds have an unbelievable talent - not for mocking - but for COPYING other bird's calls. And its not just the calls of other birds they copy; they can learn and mimick other sounds, including cars, frog calls, insect chirps, sirens, clicks and clanks of machinery, and even the buzz of chain-saws!

This particular Mockingbird flew to the top of a large Cedar tree in my yard and promptly began to belt out what can only be described as the American Top 40 of the bird world! It was amazing, actually. I was struck with awe, how this tiny little creature could have such a varied and wonderful vocabulary (Mockingbirds can memorize over 200 calls and sounds). It was such a treat to have an early-morning concert right in my own back yard. I truly savored the moment.

So do yourself a favor. Put down the iPad, turn off the TV, tear youself away from Facebook and Twitter. Go outside in the morning and just listen. Listen. Like me, you might discover you've been missing something pretty cool.

P.S. Here's a video of a Mockingbird imitating a car alarm .