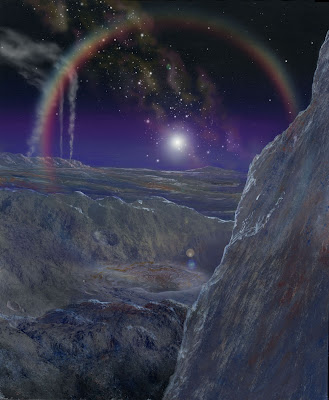 The Kuiper Belt, in case you're not aware, is a mysterious region of space just beyond the last planets in our solar system. Think of Pluto, and you're thinking Kuiper Belt. Cold, distant, mysterious, and little understood. Scientists really aren't sure what's in it, but they know there's lots of it, whatever it is. Its a region of space looking for an identity. Take poor 'ole Pluto for instance. At first, you're called a planet, albeit a tiny one. Then scientists decide maybe you're not. So then you're a planetoid, or maybe a giant asteroid, and then - finally - you're dubbed a 'Dwarf Planet'. I suppose you could say Pluto is now the red-headed stepchild of the solar system. And with that new designation, Pluto is largely ignored. Yes, there is a probe on its way there to do some studies, but that probe was launched well before Pluto came 'out' as a Dwarf Planet. Now, all the science shows about the solar system stop talking when they get to the part about Neptune. Pluto has been dropped from the charts and the text books. Its just officially part of that nebulous Kuiper Belt.

Being a single, gay Mormon trying to remain faithful to Church teachings is a lot like being in the Kuiper Belt. When I was younger, I was considered someone in a regular orbit around the Gospel sun. There were lots of singles activities, I was very active in the social scene, tried dating women, and there was nothing 'eccentric' about me. As I got older and was still single, it got harder for people to define where I fit in. The possibilities seemed to narrow. I felt a little more distant. Things got a little colder. People had a hard time understanding why I hadn't gotten married (and at that time, so did I). My 'orbit' was degrading. By the time I had aged enough to be in the 'older singles' group, things had really started to chill. I was lectured by parents, friends and leaders to 'get back on track'.  Frustrated friends tried setting me up on blind dates, and when those relationships sputtered, there was open disappointment in me. There were times when folks actually berated me and got hostile because I was still single. I remember on one occasion I was in the Temple, and a Ward member decided it was time to remind me of my status and openly chewed me out me right there in the hallway. Sheesh!

Since I've fully accepted my homosexuality (finally!) and come out to my Church leaders, I can't say things have gotten worse or better. The one positive takeaway is that they don't push me to date or berate me for being single. On the negative side, there seems to be even more confusion about where I fit in. Now you've got a single member who really can't benefit from what the Church considers singles programs - all of which are designed to ultimately get you hitched and back in that 'regular orbit'. Eventually I came to the point where I couldn't stomach attending the dances and singles conferences, and stopped participating in the Singles Program completely. That was a healthy decision.

I think the Church is largely at a loss as to what to do with people like me, or anyone that doesn't fit the hetero-normative model that sits at the very center of Mormon culture and doctrine. People like Ty Mansfield or Josh Weed get a lot of press, and are immediately held up as proof and hope that people can 'change their orbits' and come back into the light. I am really thrilled for these folks, and have nothing but good things to say about them. But the reality is that, for most of us MoHos, that doesn't happen. We either fly out of orbit altogether to the galaxies beyond, or remain here in our eccentric orbits as curious, frozen objects in the Mormon Kuiper Belt.
Posted by Neal at 8:28 AM

Nice post. Thanks for sharing this. Social activities for single gay men is absolutely an area where the church will need to change if it is sincere about embracing it's gay members. Best regards, Brad

As a 63 year old, active, gay, single, male member I know how you feel. After about age 35 or so I was generally ignored. Going to church has become a habit and my testimony and relationship with God my own.

You'll get married after this life if that is what you want. God will make a way for that. Just live your life as you should here and now.

Thanks guys. Glad to know I'm not the only KBM (Kuiper Belt Mormon)!

Anonymous has a good point. We each must live our life in the best way we know how. God will surely not punish us for doing our best.

It is regrettable that the church is focused mostly on the "normal" folk. I guess there have to be decisions made as to where to focus the use of scarce resources. One would hope that our Home Teachers would be drawn to support us as individuals and be our friends, but regrettably not all who serve as Home Teachers understand the opportunities for delivering love that that calling represents.

Candidly, very few of my closest friends are members of the church. I am drawn to like-minded people from my work and school and volunteer settings. They accept me as I am and I accept them. No questions asked.

Our ONLY reliable source of support is from God through the gift of the Holy Ghost. Maybe if we don't get our earthly socialization and support at church, then we need to look elsewhere. Sad, but probably true.

Thanks for teaching me about the Kuiper Belt. I enjoy visiting you there.

Emer, thanks for your thoughts. However, I hope I am not considered a MEAL. You never told me you came from a tribe of cannibals! :)

If you are the planet Pluto, then I'm probably something even more unknown beyond. (Did you have to use a metaphor that sounds an awful lot like "Outer Darkness"?)

Thanks for this post... It provoked some interesting feelings for me, but I'm still collating.

Hmmm. Never considered the outer-darkness angle, and that certainly wasn't my intent.

I would consider you more like a comet, John. You left for a little while, then came hurtling back - trailing streams of glory in your wake!

I really enjoy this post. There are so many of us who cannot be neatly defined or slotted into the programs of the church. We are our own universe.