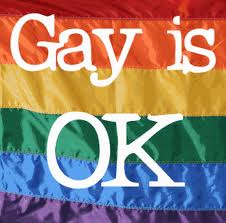 There's been a lot of discussion in MoHo circles on using the term 'GAY' lately. Not that this is anything new - it's come up frequently in the past, and usually centers around the desire of some gay Mormons to be called anything BUT gay! And who have adopted all kinds of terms that are supposed to somehow take the 'gayness' out of being gay. Same-Gender Attracted (SGA) is the one I hate the most - especially when it's coupled with the phrase 'suffering from' or 'struggling with'. Its so clinical. (Ironically, an early meaning of the word 'gay' meant a straight man who slept with a lot of women! My, how things have changed! Read the complete history of the word here) .

The only person who's posted anything on this topic that makes relative sense to me is Josh Weed. You can read his take on using the term 'gay' here. I love the way this guy thinks and writes. But I think there's another issue here that still needs to be addressed. Josh alluded to this in his post, and its really the heart of the matter.

And they assume that in the most literal sense of the word. I'm not going to go through the litany of reasons why, because they really don't matter. What does matter is that they are dead wrong. The truth is that there are so many reasons why gay people are good that I can't even begin the list! There are as many reasons why gay people are good as there are that Mormons are good. The problem here is a matter of perception.

Now, I have a solution to this dilema for any who care to listen. I'm taking this directly from the playbook of Mormonism itself:

From the earliest beginnings of the Church of Jesus Christ of Latter-Day Saints, members have been called 'Mormons'. This label was originally applied in spiteful derision, and was soon adopted by all enemies and critics of the Church. Calling someone a 'Mormon' was a decided insult. If you were a Mormon, you were part of a despicable cult. MORMON = BAD. Very, very BAD!

The Church struggled against this epithet for 150 years, and spent considerable time, effort and money trying to get people to quit using the term. They hired a PR firm to create a snazy Church logo that prominently displayed the full and official name of the Church. General Authorities gave talks and published articles on why calling us 'Mormons' was inappropriate. The Church PR machine churned out 'style guides' for the media to use, hoping to divert and dilute the use of the word 'Mormon', and focus on the official name of the Church. And it all failed. Totally, utterly, miserably failed. No matter what the Church did, people still called us Mormons. Even if a newspaper article started out using the full name of the Church, it inevitably used the word Mormon somewhere in the article. 'MORMON' stuck like glue. Super-glue. At some point (recently), the Church decided to take a different approach, which I think was inspired.

Witness the emergence of the 'I'm a Mormon' campaign - the culmination of a change that started several years ago. Rather than fight the use of the word itself, the Church chose to embrace it and alter the perception of what the word meant. Through the campaign, Mormons are portrayed as ordinary, likeable people - just like everyone else. We are approachable, human, and real. And its working - the campaign has been a huge success and had a positive influence on the perception of the Church. People both inside and outside the Church are now more liberal in their positive use of the word 'Mormon'. The stigma is lifting; attitudes changing. MORMON no longer  = BAD. Now, as a people, we stand with pride and relish the 'Mormon Moment'. No one calls it 'The Church of Jesus Christ of Latter-Day Saints Moment'!

So, to my MoHo friends who find using the term 'gay' embarrasing, difficult, distateful, or 'BAD' -  I think you will find that you are in an identical situation as the Church. You can adopt 16 syllable alternative descriptors for 'gay', but society is going to ignore that, let alone understand it. If you announce you are 'Same-Gender Attracted', everyone will still call you 'gay'. When people talk about you behind your back, they won't say 'he's Same Gender Attracted' - they're going to say - 'he's gay'. If you wrote a book about how you really aren't gay, people would still say "Hey, did you see that book by the gay guy who says he isn't gay?" The media will call you gay. Bloggers will call you gay. Your momma will call you gay! Even if you claim to have switched orientations, people will call you ex-gay! 'GAY' sticks like glue. Super-glue.

The only way Mormons are going to change their belief that GAY = BAD is for gay Mormons to embrace it and alter the perception of what the word means. Take a lesson from the Church.

Someone once asked Jospeh Smith what the word 'Mormon' meant. His reply was that it meant 'more good'. I think its time we let people know that 'gay' is a good word too. Make this your 'Gay Mormon Moment'. Gay is OK!

Yes, exactly! I've thought this for a long time. It's really frustrating to me how so many gay Mormons purposely dilute the power of conveyance of their stories and experiences by holding out against the word "gay."

Your "Mormon" comparison is spot on. That's a good one to use to get people to see why it's important to use words that people know, and to own them.

Update: I came across a transcript of Bro. Mosman's talk which he gave at the 'Circling The Wagons' conference in SF recently. All I can say is 'AMEN" to this:

Second, on nomenclature, and this is the only point where I’ll outright say that I’d like the church and its members to make a change: the church seems to encourage people to refer to LGBT people as people who “suffer” from “same-sex attraction.” I don’t believe that most Mormons understand that the term “same-sex attraction” is diminutive and offensive. I think we don’t grasp that. It reduces a gay person’s feelings for a partner, which are as rich and varied as yours and mine are with our spouses and which involve feelings of connectedness and a shared life, to “attraction.” The term tries to make it all about sex. I’ve joked with friends that if you were to continually try to contend that what I feel for [my wife] is sexual attraction and nothing more, eventually you’d be coughing up some tooth fragments. I wish we would reconsider the use of terms that trivialize the gay experience or make it all about sex or attraction.

Terms like "same-sex attracted", or "same gender attracted", or worse, their acronyms "SSA", "SGA" may be symptomatic of a more general theme in Mormonism to use softened language to deal with uncomfortable topics. I can think of some other church terminology that might function in a similar way: "less active", a "wayward" child, gay "lifestyle", "the world". Language is so interesting! It can be contraining or liberating, reveal clarity or perpetuate confusion. I am not a fan of the use of SGA or SSA, especially because they sound so clinical and because they are usually preceeded by some negative word like "suffer", as you indicated. Thanks for getting to the point in your post!

I agree with this! I hate when I am at my Arizona Gay Mormon Social, and a fellow guy says, " I'm Struggling with SSA or I have SGA." Gay is the proper term I use. The term SGA or SSA came from members who were homophobic and didn't want to use the term gay.

Thanks Chris and M. Appreciate your further insights. :)