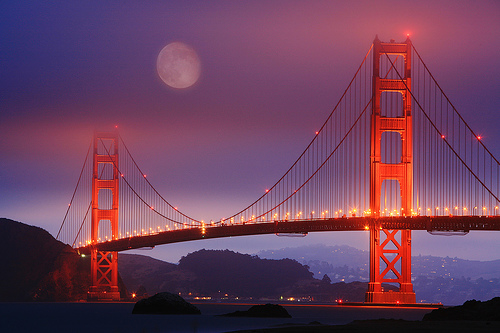 1.
a:  a structure carrying a pathway or roadway over a depression or obstacle
b: a time, place, or means of connection or transition

There are a number of initiatives in the MoHo community either to support Mormon homosexuals or to reach out to disaffected gays or the gay community at large. Some of these are new, and a few have been around a number of years. I think anything that gets us all talking and sharing experiences and ideas is a good thing (as long as its civil). It's interesting to see the different positions and approaches each of these organizations take and how people respond to them.

One of the newest efforts is Mormons Building Bridges , which sprung onto the scene this summer by asking faithful Mormon allies to walk in Gay Pride Parades .The success of it was unexpected, exhilarating, and it made national headlines. Now, MBB has its own Facebook group and is using social media to build membership. Another initiative is Mormon Stories' Circling the Wagons, which has sponsored conferences in a number of cities, also with the aim of opening dialogue on the subject. Additional efforts are under way by Far/Between, North Star, Compassionate Cause and others to tell the gay Mormon story in all its variety and to open meaningful dialogue on this critical subject. I only wish the Church was more participatory. :(

It is my prayer that each of these efforts will help build bridges of understanding, love, tolerance and hope for our gay bothers and sisters. We sorely need it! I publicly and privately support a number of these projects, and encourage all to do the same.