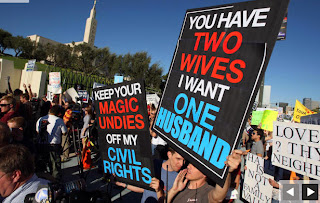 A while back I wrote an historical piece about what I consider the Mormon Stonewall (read it Here). Today I ran across a document that would seem to be an epilogue to those events.

The document in question is a proposal written by Elder Dallin H. Oaks in 1984. This wasn't too long after the publication of the Payne Papers (linked Here), and just a few months after Elder Oaks was called to be an Apostle. So this may well be the first major project he worked on in that role. As you will see, many of the thoughts present in the formation of the defunct Values Institute are carried over in this document. Its also apparent that the Church has followed this exact plan for the past 29+ years in its approach to oppose Gay Rights.

In short - the recommendation was to allow certain types of legislation that had slim chances of winning, that focused on punishing 'sin', or that posed little 'threat' to the Church to go unchallenged (and therefore make our stance seem less "religious"); but to vigorously react to ideas of Gay Marriage (Prop 8) or inclusion of gays in areas where minors may be 'recruited' or influenced by gay adults (Boy Scouts Policy). Distinction was made between those who experienced the homosexual 'condition' and those who engage in homosexual 'practices'. Its a fascinating read, so dive in: